Her Own Disability Empowered Virali To Fight for The Rights of Others, Wins Plan India Impact Awards

Transportation and ease of access in public spaces are vital components of independent living.

Improved accessibility gives people with disabilities the opportunity for independent living within the community.

Meet Virali Modi, a disability-rights activist, motivational speaker, model and many more. She works hard to make her voice heard by the country and wants to address the problems faced by people with disabilities, especially while traveling on the country’s trains.

In India, nearly 22 million have some sort of disability. However, only 3% of public spaces are accessible-friendly.

“Even if some places are termed as disability-friendly, they may not be friendly to disabilities. Some places are modified for people with visual impairments but not for those with locomotor disabilities. People cannot choose their disability, so it is important for the government to address everybody’s needs,” says Virali.

To ensure railway stations are accessible to those with locomotor disabilities, Virali started a campaign named #MyTrainToo. The petition started online and has garnered over 6 lakh signatures and impacted 9 railway stations across the country. Recently, she also received a special award as a digital champion for girls’ rights at the Plan India Impact Awards 2022 (PIIA 2022).

Empowered by own struggles

It all started almost two decades ago when Virali contracted a deadly case of Malaria. She had severe respiratory complications, suffered a cardiac arrest, and was left in a coma. But, being the fighter she is, Virali emerged miraculously from it and was left paralyzed from the neck down.

“I was bound to a wheelchair. It was a hard time for me, but with the support of my parents and doctors I slowly got used to the new normal,” says Virali.

As she began catching up with her routine life, Virali had to travel across the state for her treatment. She was living independently by then and decided to travel by train. However, her experience at the railway station was a horror. Since the station was not accessible by wheelchair, Virali had to be physically lifted into the train by one of the male porters.

“The man not only gave me disgusted looks but also touched me inappropriately. I was shocked throughout the train journey and did not know how to process what had happened. But this was not the only time. I experienced the same trauma a few years later which is when I decided to speak out,” says Virali.

After hearing Virali’s struggle, so many other people with disabilities opened up about the assault they faced while taking public transport. In 2017, she wrote an open letter to the Prime Minister and the Railway Minister but was ignored.

So, she shared the same on her social media handles and launched the petition #MyTrainToo. While government officials did not reply to it, her post became viral and was reshared by many. 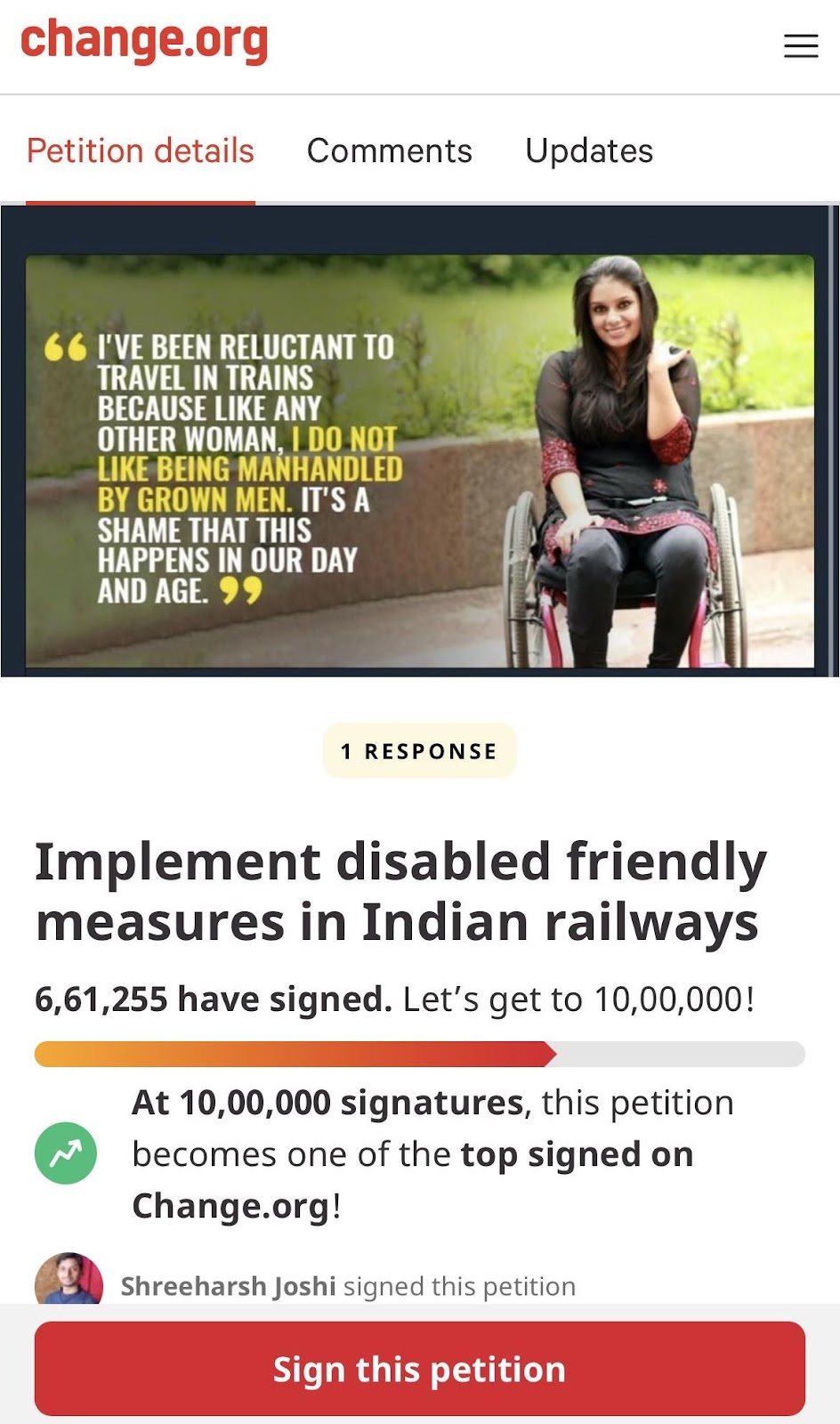 “I received over 6 lakh signatures on the form. But, this petition kept getting transferred from one Ministry to another and I was getting frustrated. Just as I was reaching a breaking point, I received a call from a railway official in Kerala. He wanted to help,” says Virali.

The officer explained how he was intrigued by Virali’s campaign, and understood the importance of it too. However, he knew that involving the government or other official ministries would be time-consuming.

“Instead, he offered another solution. He wanted to know what the railway station could do at a minimum budget, without making permanent renovations,” says Virali.

After brainstorming and speaking with experts, the duo began work at the Trivandrum railway station. By gathering funds from multiple sources, they installed portable ramps for trains and washrooms, and small wheelchairs. With the help of NGOs, the porters were also sensitized about people with disabilities, how to help them, and more.

Her campaign even benefitted railway stations in Chennai, Hyderabad, and Mumbai.

In the future, Virali hopes to convert all the railway stations across the country into inclusive ones. To achieve this, she is currently spreading awareness about disabilities through social media, workshops, and modeling. She hopes to get the attention of large brands and urge them to produce inclusive clothing. 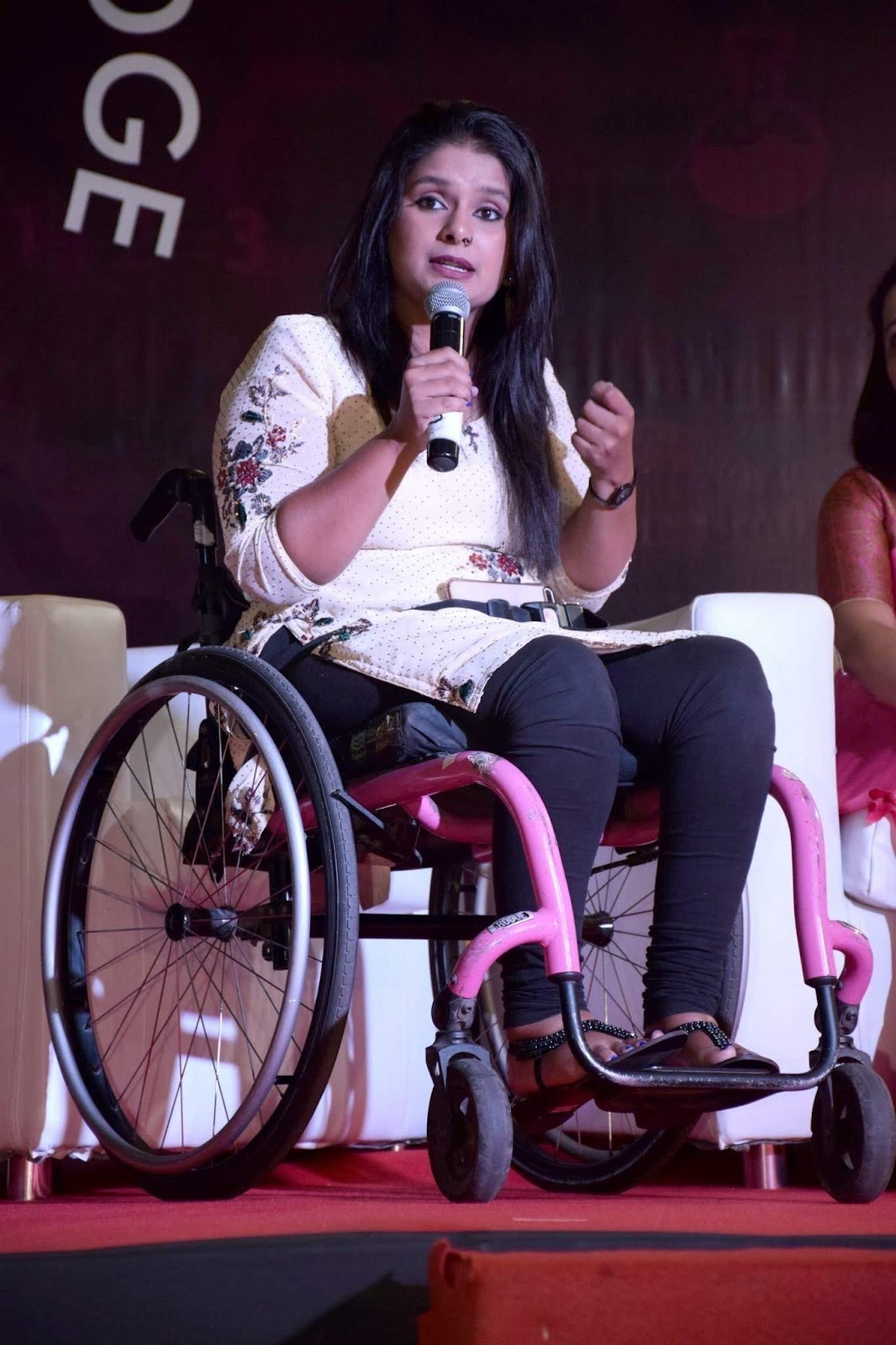 Virali speaking at an event.

Virali concluded by saying, “The PIIA 2022 is a way to boost my morale and restart campaigns that became dormant owing to the pandemic. I was ecstatic to receive a special mention award and I am grateful that it was from Plan India, an organization dedicated to creating change and bringing changemakers to the limelight.”